THE ORICO USB 3.1 GEN2 TYPE-C NVME M.2 ENCLOSURE DOES THIS SLICK ALUMINUM OPTION STAND OUT FROM THE CROWD?

Sold through Amazon for $42.99 (before a current 10% off coupon at checkout), the enclosure sits in the middle of the $30 – $50 price range we see for such enclosures, and its lightweight all-aluminum construction is quite slim and has a minimalist look. 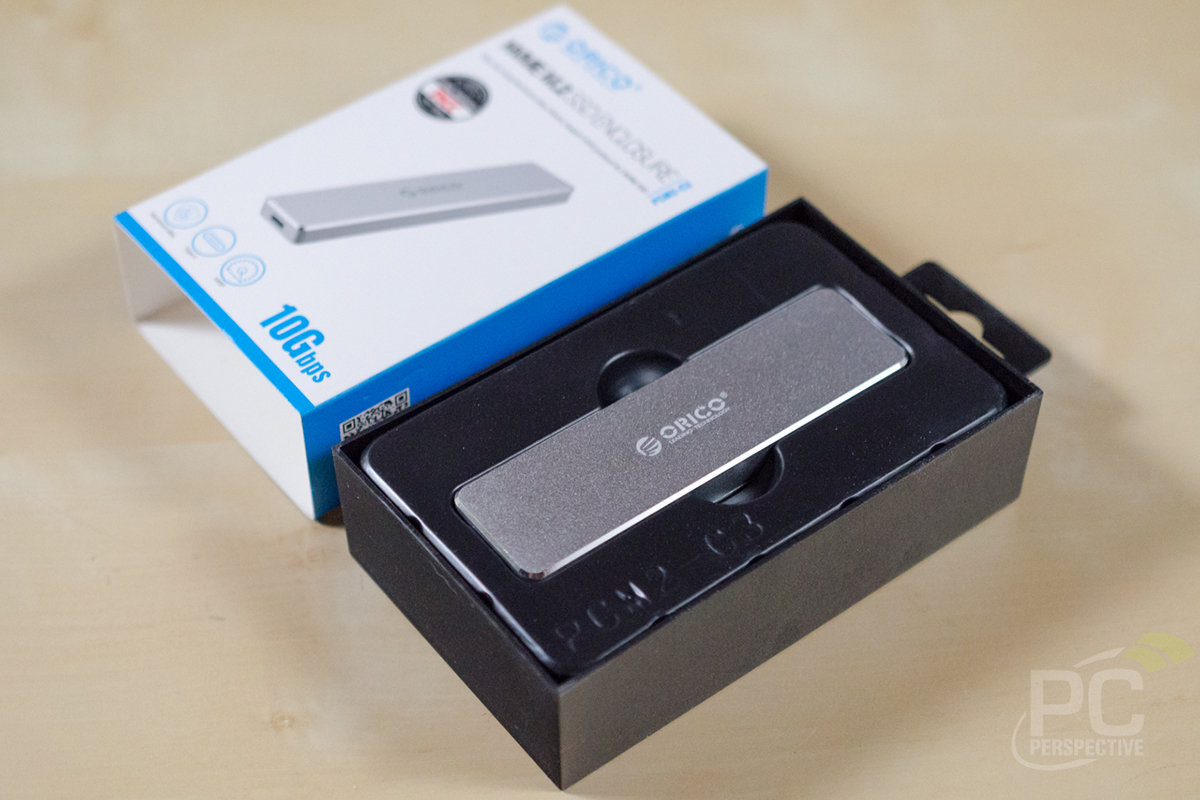 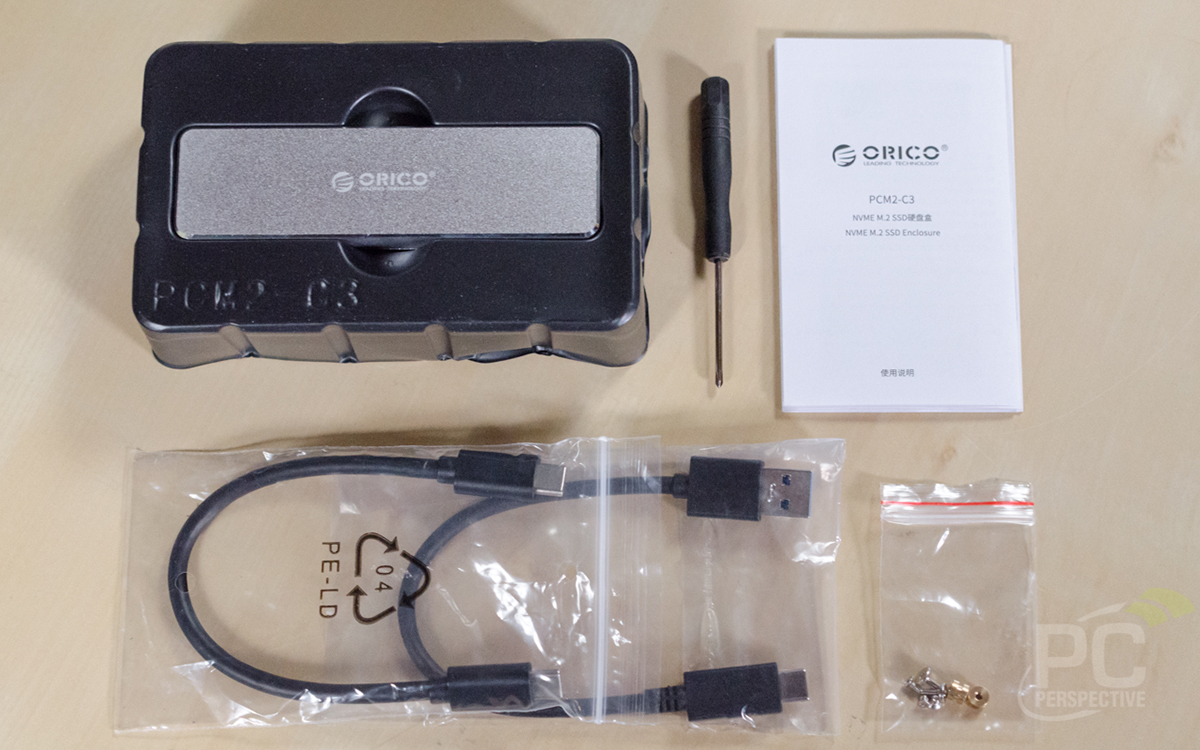 The ORICO NVMe enclosure is packaged with a pair of USB cables – Type-C/Type-C and Type-C/Type-A – and a small screwdriver to open the unit and install a drive. This is not a tool-free design, but it only takes the removal of a single screw to access the interior, and the bottom panel simply slides to unlock and comes off. 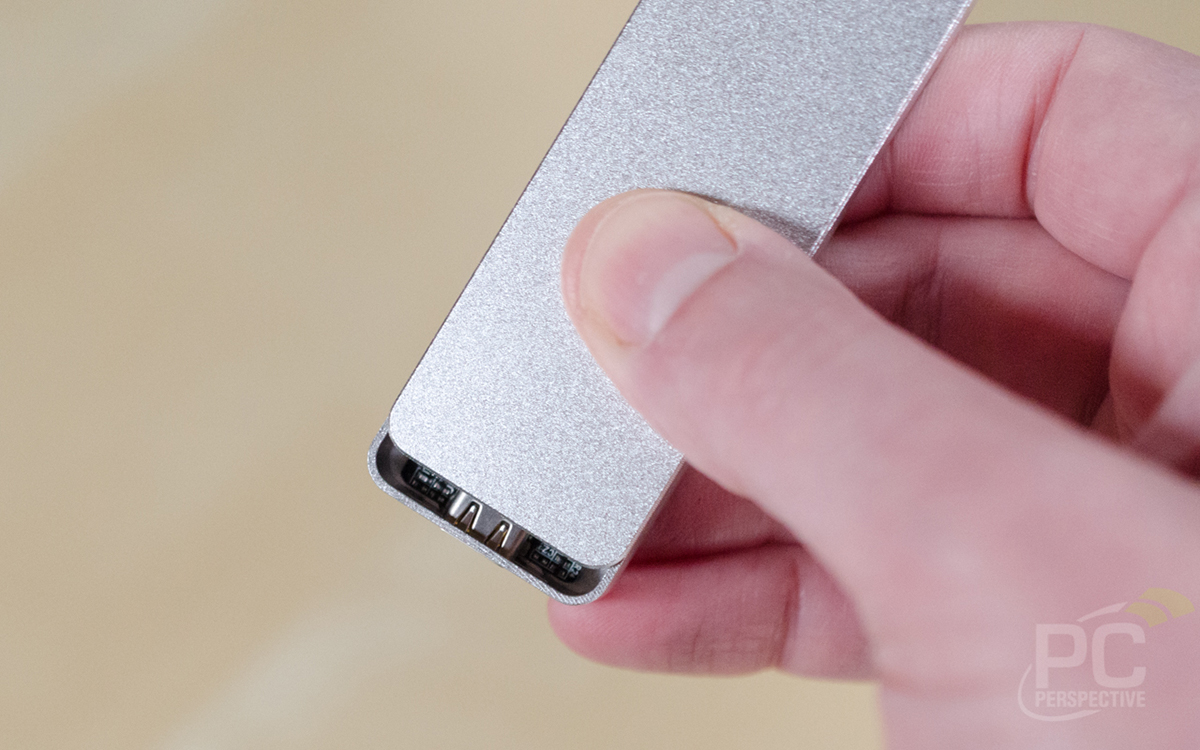 Inside both sides of the aluminum enclosure are thermal transfer pads, as the enclosure itself acts as a heatsink. The PCB has copper bars and is perforated to help with cooling, according to Orico, and drives lengths from 2230 to 2280 are supported. 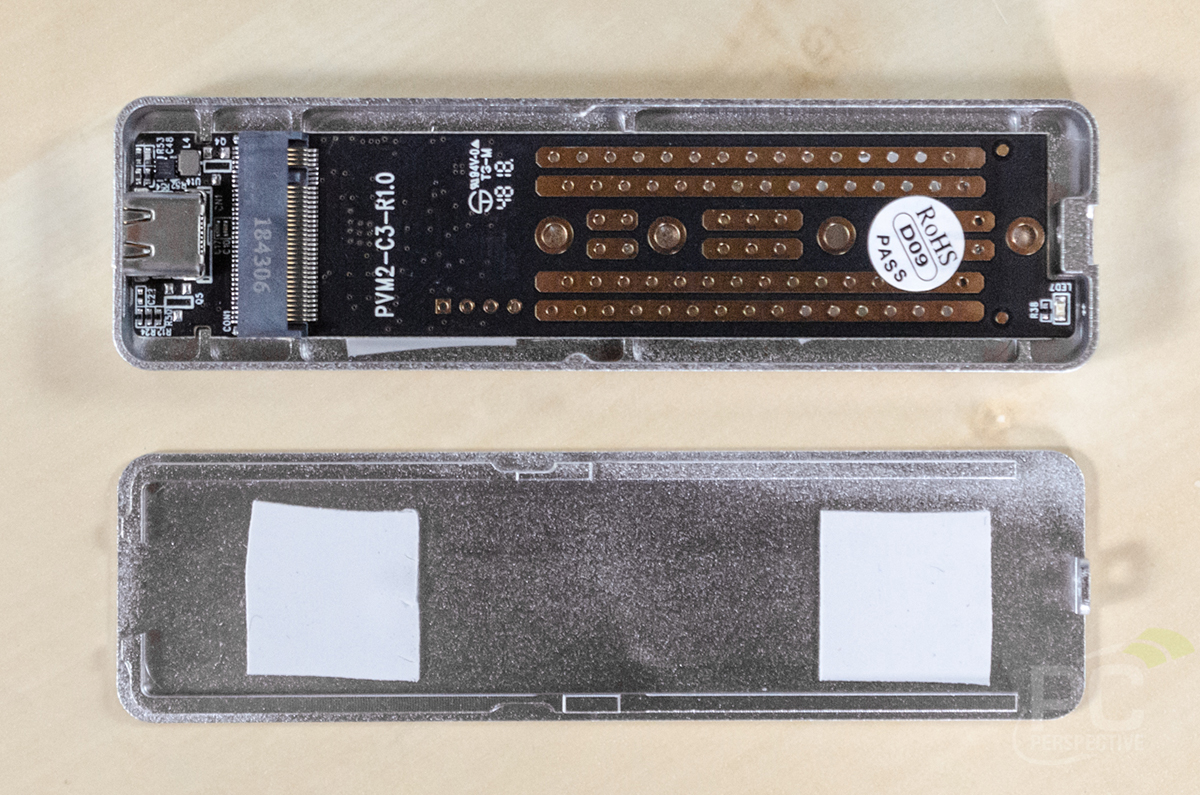 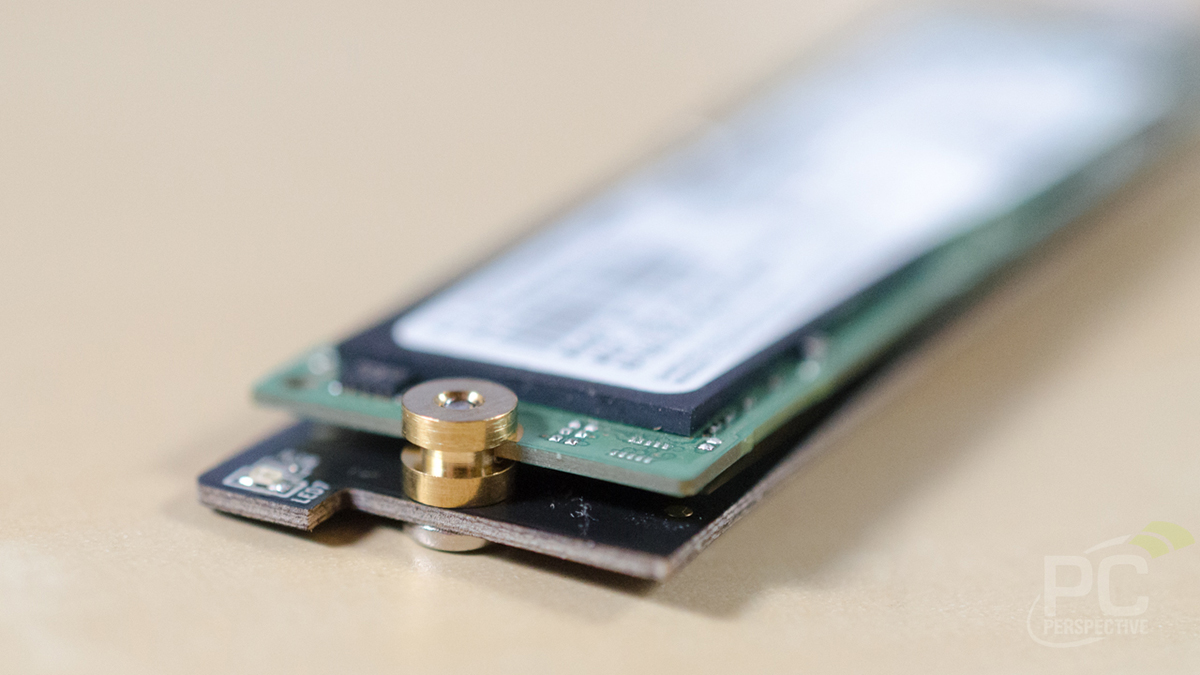 Installing an NVMe SSD (M-key NVMe SSDs only) is simple enough with the included kit, as a slotted cylinder fits against the end of the SSD and is secured with a screw on the opposite side.

After securing the drive simply place the PCB back in the enclosure with a pair of helpful notches near the USB connector to guide the way, and then it’s just a matter of sliding the panel shut again. With its USB 3.1 Gen2 interface the highest theoretical transfer speed should be 10Gbps, though in practice this will be a bit lower and ORICO only claims up to 950+ MB/s. In most real-world testing I saw speeds a little below this, but always above 900 MB/s for both reads and writes with both a WD Black SN750 1TB and a Samsung SM961 256GB SSD.

Caching in Windows did boost performance, with writes peaking close to 1GB/s during this large ISO transfer:

In addition to simple large file transfer tests I quickly benchmarked the Samsung SM961 using the ORICO enclosure under Windows 10 on a new HP Spectre x360, and once again saw sequential read/write performance of over 900MB/s in the default 1GB test as well as a 5GB test.

To see how the ORICO enclosure might fare under MacOS I plugged it into a 2019 iMac system, and benchmarks told the same story as the windows system. I took things a step further with the iMac and installed MacOS onto an NVMe drive using the ORICO, and that worked just fine.

As an OS drive performance was pretty good – though obviously lower than an internally-connected NVMe SSD.

During use the ORICO enclosure gets quite warm, which makes sense considering the internal heat transfer pads and aluminum construction. Not hot enough to burn or melt anything, but very warm.

After playing around with this ORICO USB-C NVMe enclosure for a couple of weeks and installing a three different drives on three different operating systems (adding an SK Hynix PC300 512GB and Windows 8.1 to the mix before I was through) , I can say it passes my inspection and is a very well made device. 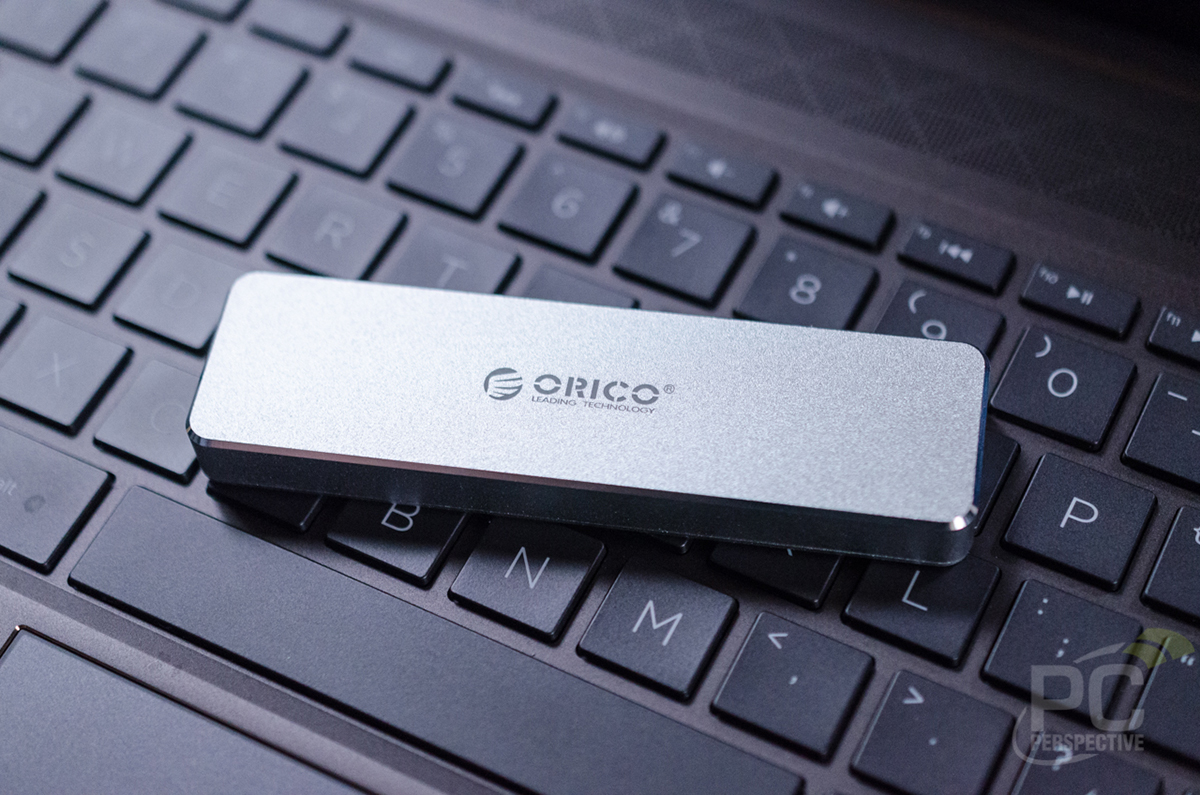 The physical construction of this slim aluminum enclosure is top-notch, and in addition to being nicely machined it is quite light (as one would expect from aluminum) at about 3.5 oz.

The included kit has everything you need including a USB Type-A adapter cable for systems without the Type-C port, and the performance of the JMicron controller was more than adequate for this interface. It does get quite warm during use, but drive performance is limited only by the interface, not thermals.

A small but welcome touch is the subtle LED light – not blinding even in a dark room. It simply glows a low-intensity blue and blinks during disk activity. 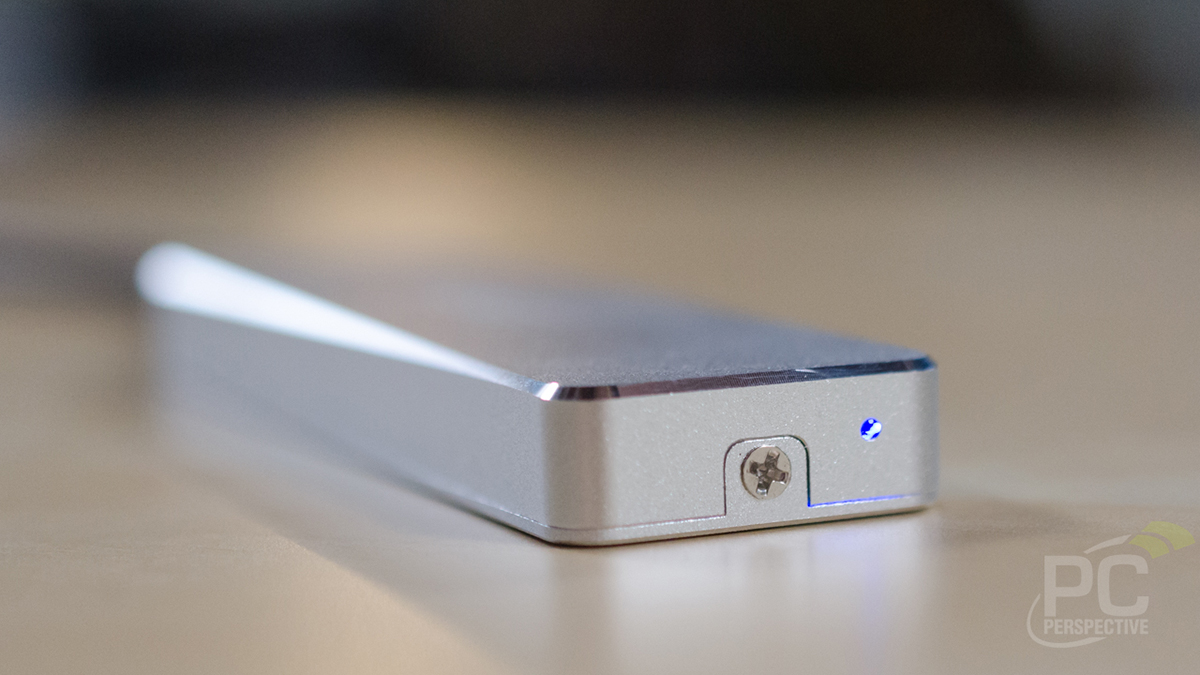 As the number of available USB-C NVMe enclosures grows this will remain a very nice option with a good mix of style and performance at its price point.