The Orico docking station features one DisplayPort, one USB-A 3.0 port, two USB-A 3.1 ports, an SD card port, and an RJ45 network port as well as a power interface and Thunderbolt 3 input/output ports. Using the DisplayPort and Thunderbolt 3 port, for example, allows you to stream your laptop to devices like TVs and monitors in 4K, which is perfect for the travel-wary professionals.

The Orico Thunderbolt 3 Aluminum Docking Station is a multi-purpose accessory designed to add expanded functionality. Due to their size, notebooks are usually limited in the amount of connectivity and functionality they can offer, so docking stations such as these are extremely handy and provide users with wide range of connectivity so they can easily attach peripherals, hard drives, flash drives and mobile devices. The Orico docking station features one DisplayPort, one USB-A 3.0 port, two USB-A 3.1 ports, an SD card port, and an RJ45 network port as well as a power interface and Thunderbolt 3 input/output ports. Using the DisplayPort and Thunderbolt 3 port, for example, allows you to stream your laptop to devices like TVs and monitors in 4K, which is perfect for the travel-wary professionals. You can also use the docking station to daisy chain up to six Thunderbolt 3 devices. 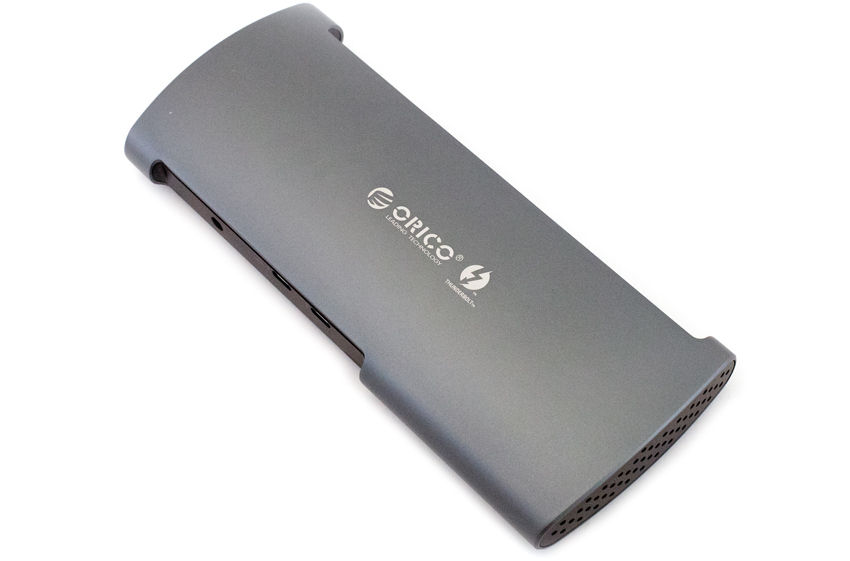 Orico also says that the USC-C port can effectively charge batteries of via its 60 watts of power, even while you are working. While this is certainly the case for smaller notebooks, we were given an error when connected to the docking station to our larger HP mobile workstations, indicating the adapter is too small. This was expected, however, as Orico indicated it only supports "compatible notebooks.” That said, the power adapter also works for smaller accessories. The Orico docking station also comes equipped with an RJ45 gigabit Ethernet port, providing users with a self-adaptive 10-1000Mbps connection.

Powered by an Intel Thunderbolt 3 control chip, this docking station has the potential to reach transfer speeds up to 40Gbps depending on the type of connected device; though if the backend connection is Thunderbolt 2, performance shouldn't be limited. In addition, the SD card slot supports up to SD4.0 2TB capacities and is quoted to deliver read speeds up to a solid 312MB/s.

Available in three stylish colors (space grey, silver, and Champaign gold), the Orcio docking station features an all-aluminum case with an anodized-treated surface for effective heat dissipation and smudge resistance. At a little over 8 inches long and three and a half inches wide, this is a fairly hefty device, though this is understandble given the amount of functionality it packs. This also means that the docking station will sit nice and firmly beside any notebook.

On the main connectivity-side of the docking station, it houses 1x DisplayPort, 1 x USB-A 3.0 port, 2x USB-A 3.1 port, 1 x SD card port, and 1 x RJ45 network port. On the other side are the power interface and Thunderbolt 3 input/output ports. The spacing between the ports are wide enough to allow side-by-side connection of devices with the usual plastic widths (and a bit more).

Nothing inside the docking station requires airflow for cooling, as heat simply radiates through the metal.

The Orico Thunderbolt 3 Docking Station certainly works as advertised. Stylishly designed and solidly built, this docking station features a ton of connectivity. Available ports are the biggest benefit of the Orico docking station it has over its competitors: upstream/downstream, the 10Gbps USBA ports, LAN, SD card port, and 8K compatible DisplayPort. As such, the Orico docking station is perfect for those who need extra functionality and display-features for their notebook. It is very portable, and thus great for the professionals always on the go. The power adapter for the docking station works well enough for users looking to add a bit extra battery life for their smaller notebooks, though it's more useful for powering plugged-in accessories.

Overall, this is another quality offering from Orico that will add a range versatility to ultra-thin notebooks.