Dubai, the largest trading port in the Middle East, has a huge market. ORICO had already moved some of its products into Dubai, and this time, ORICO team had been more aggressive, to seek strong partners in the Middle East and prepare for ORICO's full march in the Middle East. ORICO also planned to set up a localized customer service center in Dubai in the near future, to provide more and better support and services for users. 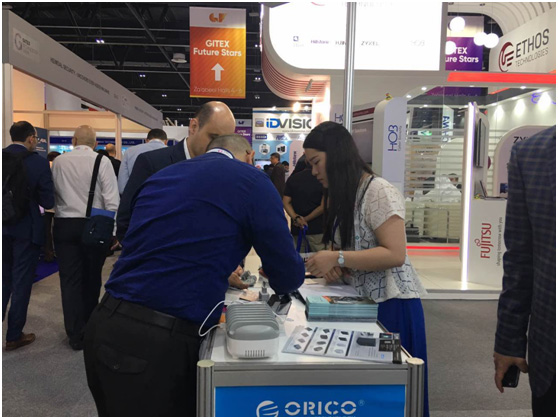 At this exhibition, ORICO charging products shined brilliantly on the spot again, the high-quality workmanship, original design, creative appearance and user experience received the acclaim of the visitors. Among them, ORICO charging bus and surge protector became the focus of attention, got a lot of praise from visitors!

This time, ORICO had received partnership invitations from hundreds of companies from Middle East, Europe, South America, Africa, Southeast Asia and other 20 countries and regions. In the future, ORICO will continue to deepen cooperation with the Middle East partners, provide leading USB technology products and services for the Middle East users, and try to become the leading brand of local USB data transmission and charging technology, spread the beauty of "wisdom-in-China" and justify the concept of "made-in-China"!